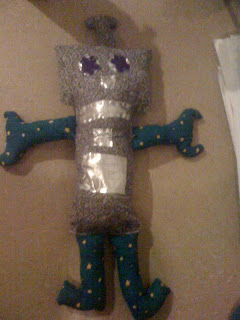 Okay even though my son's birthday isn't until December I have been working with him on a theme. We've rocked the dinosaurs for 2 years now and I am so not into it for year #3! I think I have finally convinced him to do ROBOTS!!!!
So I have been googling like crazy for robot related stuff. And I have found some cool stuff.
Which as the next few months unfold I will probably post here.
My first exciting endeavor is to make a robot out of cloth. Luckily I have stockpiles of fabric in my garage. I let Kieran pick out some acceptable patterns-he chose a star print and grey swirls.
I have this great book of patterns for stuffed animals and I just modified one of the dolls into a robot.
Anyhow, the end result is 2 pretty lame robots but not bad for a first attempt.
Wish me luck on the next try.
Posted by FunkyMama at 12:05 AM